Motorcycle Bell Meaning: Artifact of Good Luck on the Road

In any community united by some attribute – in our case, this is a type of transport – various signs, superstitions, and traditions inevitably arise.

A motorcycle is a means of transportation of increased danger. Sitting on it, a person inextricably connects his life with risk, adrenaline, an aura of adventure, and romance.

Such an environment is a favorable ground for the appearance of various superstitions and signs.

Where did the tradition of hanging a bell on a motorcycle come from? What does a biker need it for, and who do motorcyclists around the world fear? Read on in this article. Today we will talk about one of the most common of them – the bell of a motorcyclist.

What Are Motorcycle Bells?

Bell may symbolize an amulet from the dark forces protecting the biker. Or as a good luck charm.

Motorcyclists are a superstitious bunch. Many believe the bell on their motorcycle will ward off evil spirits. Some even go so far as to say that it is a lucky charm that will keep them safe on the road.

There are many stories about how the bell became a superstitious object for motorcyclists. One story says that a group of motorcycle riders was once saved from a severe accident by a bell that they had attached to their bikes. Another story claims that a bell rang mysteriously when a rider was about to be hit by a car, warning him of the danger and saving his life. 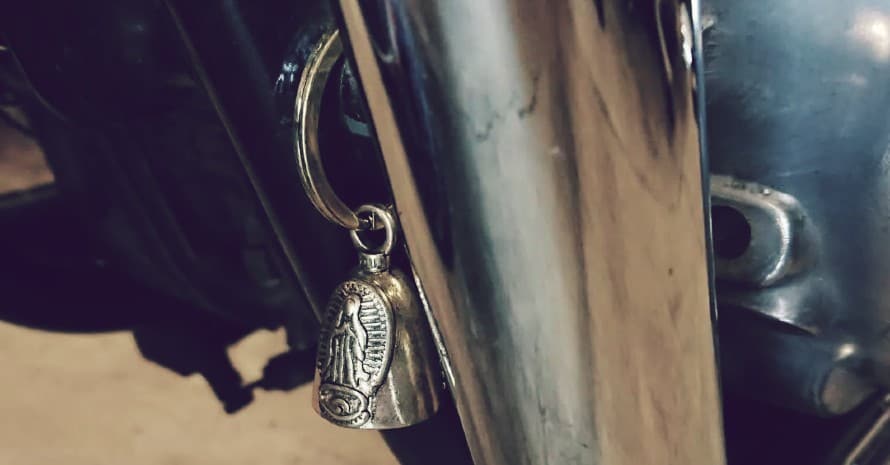 Whether or not you believe in the power of the bell, there’s no denying that it’s become an important part of many riders’ superstitions. So, if you’re ever out on the open road and you hear a bell ringing, don’t be too surprised if you see a motorcyclist giving it a quick tap for good luck.

The Story of the Guardian Bells

Of course, no one can say for sure. There are only theories, all of which have the right to exist:

And what could be worse for a motorcyclist than a motorcycle malfunctioning at speed? There is a belief in the biker community that gremlins inhabit the roads, and as soon as they see a motorcyclist, they make a mess of his motorcycle, and it can break down. And the bell acts as a deterrent for the gremlins.

And the theory with gremlins is held by most bikers, even if it looks the most unrealistic of the three.

Of course, many are familiar with Gremlins from the movie of the same name, released in 1984. But not many people know that these mythical creatures originated much earlier and are described in many ancient books and represented in different cultures. They have different names, but their behavior is the same, they make people sick.

But science has not proved the existence of gremlins. They are more often characters of fairy tales and superstitions. But as bikers are superstitious people and try to protect themselves as much as possible, they use a bell to chase gremlins away from their iron horse.

Why Do Bikers Put Bells on Their Bikes

By hanging a bell on their motorcycle, bikers are counting on the fact that, according to legend, gremlins can’t stand its ringing, and as soon as they hear it, they will immediately leave the motorcycle.

Some believe that it may warn just before danger by ringing and signaling the rider to pay attention.

Where to Hang Your Guardian Bell?

It is usually hung at the lowest point of the bike. It can be a frame or an exhaust pipe, it is not important as long as it is firmly attached to the bike.

As with any superstition, the guardian bell has a strict set of rules that must be adhered to.

If you bought a motorcycle and it had a bell that belonged to the previous owner, it is forbidden to use it on your bike. Since no one personally gave it to you. There are two options here as to the best way to proceed:

If there is no longer any connection with the previous owner, simply remove the bell from the purchased bike. But don’t throw it away, it’s not just a souvenir. If there is no connection with the previous owner better take it to some club of bikers for storage. After all, it may not be a simple amulet bell and it hung in memory of a deceased friend. It is often practiced in biker clubs.

3. Do Not Reattach the Fallen Bell

If the bell has fallen off, it is a bad sign. It is believed that gremlins tear it, so the fallen bell loses its protective power. Therefore, when you first clasp it, fasten it more securely.

You can’t sell the bell. As it is a gesture of care and goodwill, it is a bad omen to sell it, it is believed that good luck will leave such a person.

And a person who will buy a bell from someone should know that such it will not have power. Only the bell that was given as a gift from the heart will protect.

Worse than selling/buying a guarding bell might be stealing it. If you do this, you will steal not only the bell but also all of that person’s bad luck.

6. Remove the Bell When Selling the Motorcycle

If you are going to sell your motorcycle, don’t forget to remove your bell, it won’t help anyone but you anyway, and you can attach it to your new motorcycle.

How To Give And Receive The Bell

It cannot be bought with money. It must be given by a friend or loved one as a gesture of care, only then will the protective properties of the rider bell be activated. As it was already written before, it cannot be found or stolen, only received as a gift from a person who cares about you.

Here are the answers to the most popular questions.

Are guardian bells only for Harleys?

No, absolutely any motorcyclist can attach an amulet bell to his bike. It’s just that there are a lot of Harley-bikers with gremlin bells for motorcycles, so there’s a perception that it’s only for them.

How many guardian bell motorcycles can you have?

You can have as many gremlin bells as you want. The main thing is that they should be given to you from the bottom of your heart by people close to you.

Are Guardian Bells expensive to buy?

It was not very expensive. It is expensive in another way, in that it is given with care, and that is more expensive than any price tag.

Usually, superstitions are believed by people who are directly or subconsciously afraid of something. The most superstitious people are pilots, the military, cosmonauts, etc. That is, people in dangerous professions, those professions where it is impossible to eliminate all dangerous factors, so you have to rely on some higher forces.

Riding a motorcycle is more dangerous than driving a car. Some superstitions are connected with this. But, at the same time, most of the risk factors that do not depend on the traffic situation can be prevented or minimized.

Many motorcyclists ride with a bell on a motorcycle. According to superstition, it protects them from gremlins on the roads. Legend has it that gremlins, with their harmful nature, try to damage the motorcycle, and the bell drives them away.

Yourmotobro.com is a motorcycle lifestyle and product review blog where a team of experienced riders conducts and publishes in-depth reviews of motorcycle gear, bike add-ons, and accessories we believe our readers are most interested in.

Yourmotobro.com is a participant in the Amazon Services LLC Associates Program, an affiliate advertising program designed to provide a means for sites to earn advertising fees by advertising and linking to Amazon.com. This means that some of our posts contain affiliate links, so we may receive a commission if you click through and make a purchase.

We use cookies on our website to give you the most relevant experience by remembering your preferences and repeat visits. By clicking “Accept All”, you consent to the use of ALL the cookies. However, you may visit "Cookie Settings" to provide a controlled consent.
Cookie SettingsAccept All
Manage consent

This website uses cookies to improve your experience while you navigate through the website. Out of these, the cookies that are categorized as necessary are stored on your browser as they are essential for the working of basic functionalities of the website. We also use third-party cookies that help us analyze and understand how you use this website. These cookies will be stored in your browser only with your consent. You also have the option to opt-out of these cookies. But opting out of some of these cookies may affect your browsing experience.
Necessary Always Enabled
Necessary cookies are absolutely essential for the website to function properly. These cookies ensure basic functionalities and security features of the website, anonymously.
Functional
Functional cookies help to perform certain functionalities like sharing the content of the website on social media platforms, collect feedbacks, and other third-party features.
Performance
Performance cookies are used to understand and analyze the key performance indexes of the website which helps in delivering a better user experience for the visitors.
Analytics
Analytical cookies are used to understand how visitors interact with the website. These cookies help provide information on metrics the number of visitors, bounce rate, traffic source, etc.
Advertisement
Advertisement cookies are used to provide visitors with relevant ads and marketing campaigns. These cookies track visitors across websites and collect information to provide customized ads.
Others
Other uncategorized cookies are those that are being analyzed and have not been classified into a category as yet.
SAVE & ACCEPT